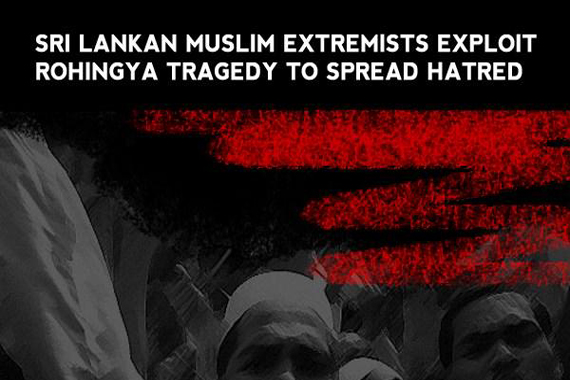 Extremists within the Sri Lankan Muslim community are exploiting the tragedy of the Rohingya people to spread hatred towards Buddhists and Buddhism not only in Burma but in Sri Lanka as well.

The extent of this bigotry is clearly seen on Facebook where various Sri Lankan Muslim groups have been uploading racist as well as gruesome images which invariably garner extremely derogatory comments – mainly in the Tamil language – towards the Burmese and Sinhalese people.

As a Sri Lankan Muslim I am ashamed and disgusted at the way lies and rumours are being spread through Facebook posts by members of my community. Photos from the Tibetan earthquake in 2010, as well as from the masive fuel tank explosion in the Congo in 2010 that killed hundreds are being passed around as photos of “Muslims killed by Buddhists” along with emotional appeals.

Any practicing Muslim would clearly know that spreading rumours and lies is un-Islamic. Islam has a very high standard; news needs to be verified and not passed on as fact especially when the consequences are liable to be devastating. Islam has commanded Muslims not to pay attention to just any piece of news or information that comes to them and not to accept just anything that anyone says to them. In the Qur’an it is written:

O ye who believe! If a wicked person comes to you with any news, ascertain the truth, lest ye harm people unwittingly, and afterwards become full of repentance for what ye have done. (Al-Hujurat 49:6)

It is sad to see so many Sri Lankan Muslims deliberately ignoring Islamic teachings and descending into racism and bigotry in the name of “protecting” Muslims. Buddhists are called “dogs” and “snakes” and are to be killed. Other Sri Lankan Muslim extremists threaten to wage jihad and chase and slaughter the Burmese. Pictures of the Buddha are altered to deface and degrade. Is any of this Islam? It is certainly not the Islam that I know and practice.

There is no doubt that the Rohingya people are in dire straits and are fleeing terrible persecution in Burma. Many have been killed and left homeless. Thousands are suffering without aid or respite. But to exploit their tragedy to thump our chests and enflame emotions is not only self-defeating but causing tension in Sri Lanka just when the tension engendered previously was fading away. You don’t help anyone by sharing hateful posts.

It is pretty clear that there are extremists and religious bigots in all of the ethnic and religious groups in Sri Lanka. Unfortunately their influence seems to be more influential than that of the moderate majority. I see members of my own Sri Lankan Muslim community descending into hatred and bigotry not only towards other Muslims but towards the Jews, Hindus, Christians and now the Buddhists as well. This does not bode well for the future of our community and country.

May Allah (swt) guide us all on the straight path and prevent us from departing it!